Note: All Examples are written in C++

Pointers are “variables” that do not hold actual content but the address where the content can be found.

We first should make sure that we know the underlying technologie. Whenever we declare a variable/object, this requires some memory in which the content is stored. We can think of the memory as a table, we store our content in the rows of the table where each row has a unique address.

So lets assume that we now declare a variable

Then (usually) the Operating system decides where to store this variable. Lets assume it is stored at 0x00101 then our memory would look like this:

whenever we now use the variable, it is known where to find the corresponding value.

We need to introduce 2 operators:

The reference operator is giving us back the address of a variable.

Its good coding practice to name the pointers with the prefix “p_” (or similar) so its clear to everyone that this is a pointer. Of course this pointer will also require some memory by itself as the address it is holding need to be saved somewhere.

Right now there is no content, the only thing we did so far is that we declared the pointer, no integer has been declared so far! Our memory could like like this:

We now want to make our pointer to point to the integer “test” we have defined before:

We now have a complete pointer. Its obvious that if we access p_test like a regular variable, we get back the the address (the Content) of it but not the value of the integer we pointed to.

If we want to access the content of the value we are pointing to we now need to use the dereference operator:

is giving us 0x00105 as this is the address where the pointer is stored.

From the memory above we can now create the following tables:

We can use pointers to other pointers:

So far we always have declared variables which are directly coupled to a variable name, like

There is also the possibility to instantiate variables/objects which are not coupled to a variable name. All we get is an address in the memory. We then can use a pointer to access this variable/object. We do so by using the “new” keyword.

It is very important to delete this variable/object after we have used it to make sure the memory is freed so it can be used otherwise.

Please note that the address of the deleted object is still stored within the pointer and it might be possible to still use it. BUT the memory is not allocated to us anymore, so it can change at any time which can lead to big catastrophes. Therefore very often the pointer is assigned to “null” to indicate that it is not in use at the moment. However, the memory allocated is freed if the program ends, therefore its up to you to decide whether its usefull to free the memory.

Pointers can be used to control arrays. After we have declared an array, we can use a pointer to point to the first address of the array. We then can use increment and decrement operators to navigate through the array.

As we have seen above we can use pointers to point to elements within an array. Also the array can be filled with pointers:

The memory in the example could look like this if we place “p_pointer_to_integer” to the first element in the array. 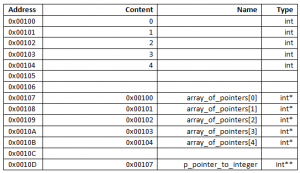 There are different ways to pass parameters to a function/method.

The problem here is that it is not obvious at the first sight that we are dealing with a reference and not with an own value. To avoid misunderstandings we can use “const”.

“Const” can be used to disallow a value to be overwritten.
For normal variables its quite easy:

will disallow to overwrite “pi” with another value.

For Parameter Passing with call by reference or pointer its a bit more complicated. Here it depends on the position. Is it left/right of */& or on both sides.