State machines are everywhere, from a simple edge detection to washing machines to CPUs. The State Machines we will talk about have a finite amount of states those are called Finite-State-Machines (FSM).

We directly start with a small State machine (I skip all the talking about washing machines and stuff, just read through this and you will get the idea).

Lets assume we want to detect a rising edge of a signal. Just in the clock period where the input changed from 0 to 1, the output should be high.

You may notice that there is a delay between input and output, the reason is that the input is checked on the rising edge of the clock and if there was a change from 0 to 1 the output will be set to 1 for 1 cycle.

From the diagram above we can extract our 3 states which are the following:

The timing diagram now can also be seen like this:

So we simply need to assign the output to the “edge detected” state and we are done, but before we do so, we go a bit more into the theory, first of all we introduce state diagrams.

Due to the simplicity of the state machine and because I don’t want to to mess up the diagrams the variable names are skipped in the diagrams, for more complex state machines they have to be added next to the input and output.
The diagrams have the following elements:

Every state has a unique number, this number also has to be in the state symbol, followed by the name

Unfortunately there is no real standard for those diagrams, there are different ways on how to indicate the output of a state, I want to show 2:

both show the same, in this state the output is 0.

The step of going from one state to the other is called transition. Every transitions comes with a condition, in our very simple example this is the input. 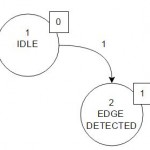 We can see that if the input is 1 we change to state 2.

So the whole diagram now can be drawn, every state should have 2 transitions, one for every possible state of the input: 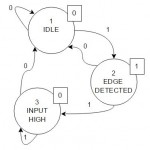 As we want to work in the digital domain we need to change the state numbers into something machine readable. There are different approaches, like gray code or “1 hot” but we want to keep it simple so we just use normal binary numbers. 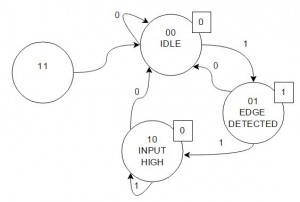 The reason I added the state “11” is that with 2 bits we have 4 possible states. Due to an error it might happen we end up in state “11” and boom… we are trapped. So it is good practice to add all possible states to the diagram to add the possibility to recover from an error. It might be possible that one edge is lost but this is still better than losing the complete functionality. It also is good practice to add an entry point so we know the initial state after startup: 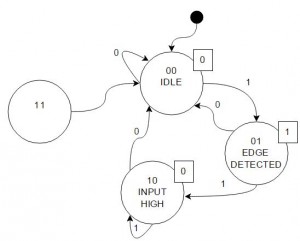 Great, so we have everything, lets bring it into hardware!
From that point on we already could implement the state machine using a switch case which would look like this:

(I added a reset input to force the FSM to the initial state and I had to rename the pins as “input” and “output” are reserved keywords.)

Simulation is giving what we expected:

We can dig a bit deeper and observe the internal state which gives us:

To access the internal register we need to add a wire and assign the register to the wire:

The way described above is how you would implement in software, if we talk about hardware we need to simplify the structure, this will also make the implementation in HDL more efficient.

First we need the truth table of the circuit which is having the following structure:

We split the bits of the State into S1 and S0.
S1* and S0* describe the state that is followed by the condition on the left side. For now the output depends on the current state.

Based on this truth table we can set up logical conditions for the output variables.
I will use KV-Diagrams to get the required equations (d is the input):

With some simplifications the hardware now could look like this:

In Verilog we can write:

and with observation of the internal states:

However, Moore and Mealy State Machines are the most common ones. The difference is that Moore based machines create the output based on the current state. Each state has a defined output (as we did above).

The Edge detection as Mealy Machine 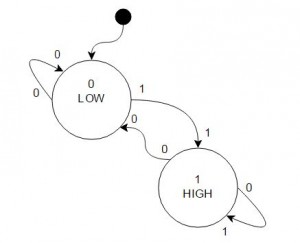 The truth table from this diagram is:

you immediately can see that this is now more compact than the Moore machine.
The Result can be directly seen from the Table:
S*=input
output=input AND NOT S

For and simple example like this, the solution above might be the intuitive way, but for more complex requirements its usually not that obvious.