Yesterday was the day the spacecraft Rosetta woke up from hibernation. I was at the European Space Operations Centre in Darmstadt to say "good morning".

But step by step.
Rosetta is a robotic spacecraft built and launched by the European Space Agency to perform a detailed study of comet 67P/Churyumov–Gerasimenko. It is part of the ESA Horizon 2000 cornerstone missions and is the first mission designed to both orbit and land on a comet.

Rosetta was launched in March 2004 on an Ariane 5 rocket and will reach the comet in May 2014. The spacecraft consists of two main elements: the Rosetta space probe orbiter, which features 12 instruments, and the Philae robotic lander, with an additional nine instruments.The Rosetta mission will orbit 67P for 17 months and is designed to complete the most detailed study of a comet ever attempted. The mission is controlled from the European Space Operations Centre (ESOC), in Darmstadt, Germany.

The probe is named after the Rosetta Stone, a basalt slab of Egyptian origin featuring a decree in three scripts. The lander is named after the Nile island Philae, where an obelisk was discovered with inscriptions. A comparison of the hieroglyphs on the Rosetta Stone and the obelisk led to greater understanding of the Egyptian writing system. Similarly, it is hoped that these spacecraft will result in better understanding of comets and the early Solar System.

The spacecraft has already performed two successful asteroid flyby missions on its way to the comet.In 2007, Rosetta also performed a Mars swingby (flyby), and returned images. The craft completed its fly-by of asteroid 2867 Šteins in September 2008 and of 21 Lutetia in July 2010. On 20 January 2014, Rosetta was taken out of a 31-month hibernation mode and is continuing to its target. 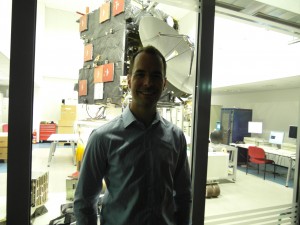 Me in front of the Rosetta engineering model 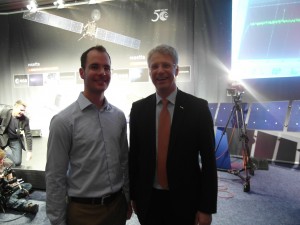 Thomas Reiter (Director of Human Spaceflight and Operations at ESA and former astronaut) and me in front of a Rosetta Model shortly after Rosetta has contacted earth after 31 months of hibernation (you can see the frequency spectrum in the background, the spike is Rosetta)

I caught the moment the signal arrived on camera: